The LAGOON 52 marks a whole new era in the design of cruising catamarans, as indeed did its predecessor, the famed 500. With its diamond-shaped vertical bows, bevelled hulls, its as if levitated deckhouse and tall rig, the LAGOON 52 is no ordinary catamaran, but its originality goes a great deal further than just its "outer" appearance, or even its interior layout. This LAGOON is the result of lengthy discussions between the architects at Van Peteghem-Lauriot Prévost (VPLP), the Italian Nauta Design agency and the LAGOON design department. These discussions led us to make some important and sometimes radical choices, while remaining faithful to what we believe in, in terms of elegance, comfort, safety, user friendliness and, it goes without saying, performance under sail. 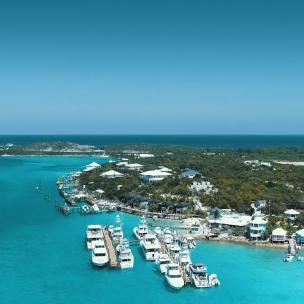 Staniel Cay is an island located in The Exuma Cays, a district of The Bahamas. Staniel Cay is located roughly 120 km south of Nassau and 400 km southeast of Florida. The island has a population of less than 118 full-time residents and has an area of less than 5 km².