This Cruiser is fast and nimble and includes a professional captain with your charter. You will have the best on the water experience available for New York harbor or Long Island sound. She operates as a sistership with a smaller SeaRay 340 to provide you and your friends with the best on-water experiences. 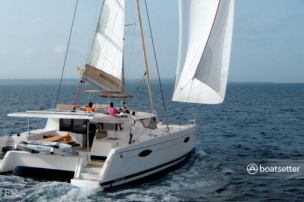 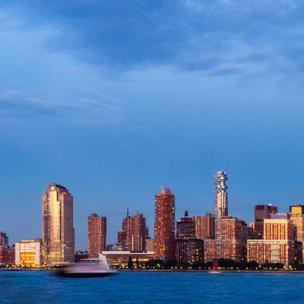 Few cities in the world are most famous than New York. From its iconic buildings and locations like the Empire State Building and Times Square to its incredibly diverse neighborhoods and so much more, New York is almost like its own country. Five boroughs—Manhattan, Brooklyn, Queens, the Bronx, and Staten Island— all sitting where the Atlantic Ocean meets the Hudson River make up this great city. New York has something for everyone and one of the most unique ways to explore is by boat.

Explore a City Shaped by the Atlantic and Hudson. With cars, trains, and planes, it’s easy to forget now that New York began as a bustling part that sat at the mouth of the Hudson River. This strategic location connected it with parts of the upstate and what would later become Canada. With your own boat charter, you can get a feel for the early days of New York while also getting a one-of-kind chance to see it from a different perspective. You can cruise under the Brooklyn Bridge head out to Liberty Island and more.

Finding the Right Balance between City and Nature. New York is a massive, sprawling city. There are so many things to explore there, but sometimes you can use a break from the hustle and bustle— and especially the traffic! With your own charter, you can head to some of the more relaxed and beautiful places that are just outside the city such as the tranquil Jones Beach State Park. Here you can enjoy some great water sports and other amazing activities.

Enjoying Boating in Different Seasons. New York gets a bit chilly. For the most popular boating activities like swimming and other water sports, the best option is usually to go between May and September. But the best part of chartering a boat isn’t just to enjoy warm-weather activities but taking advantage of exciting things such as fall boat cruises along the coast and boat parties on holidays like Christmas and New Year’s. New York is one of the most incredible cities on the planet and there is so much for you to dig into and explore. From its massive buildings and monuments to the arts and culture and so much more, New York is truly a great destination. Reserve your charter boat now to get a whole new perspective on this amazing city!